BREVARD COUNTY • MELBOURNE, FLORIDA – Just two weeks ago, the Sea Turtle Healing Center at the Brevard Zoo admitted 13 green sea turtles over the course of a weekend. Since then, the zoo staff has been hard at work taking in even more patients.

Between then and now, the Brevard Zoo has taken in an additional nine green sea turtles—six of which are still there. 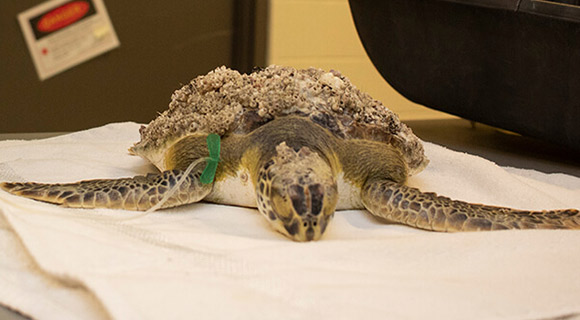 On March 14, the zoo took in three juvenile green sea turtles, but they were all transferred the following day to Clearwater Marine Aquarium.

The following Wednesday, two juvenile green sea turtles were admitted—one of which unfortunately died shortly after.

The other, now named “Snoot,” is already receiving medications and fluid therapy.

One of those patients, “Squirt,” was admitted with fibropapillomatosis tumors.

They still do not know what is causing this influx of new patients, but they are working hard as ever to get these little guys back out to the ocean.

The facility includes two separate holding facilities with a total of 12 tanks ranging in size from six to 20 feet.

If you find a sea turtle that appears to be in distress, contact Florida Fish and Wildlife Conservation Commission or Sea Turtle Preservation Society. Give to help rescue and care for these creatures: