The combined company has plans to expand its Brevard County workforce, although details have not been disclosed.

Headquartered in Melbourne, L3Harris now is the largest aerospace and defense company based in Florida, as well as Florida’s eighth-largest company overall. 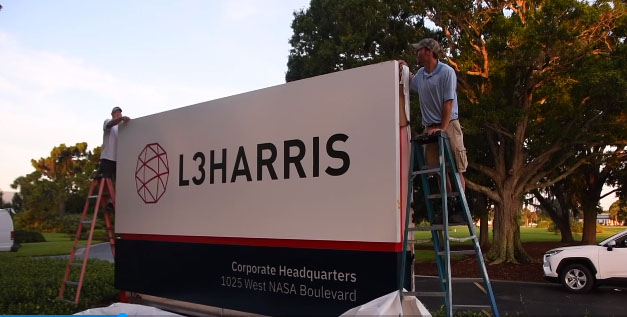 Additionally, two of the four segments of the combined company will be based in Palm Bay. They are:

• The integrated mission systems segment, with about $4.9 billion in annual revenue. That segment includes intelligence, surveillance and reconnaissance; advanced electro-optical and infrared solutions; and maritime power and navigation.

• The space and airborne systems segment, with about $4 billion in annual revenue. That segment includes space payloads, sensors and full-mission solutions; classified intelligence and cyber defense; avionics; and electronic warfare. 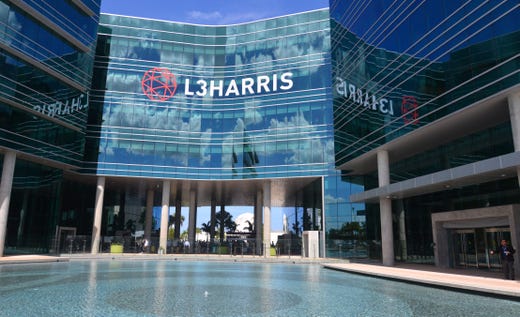 The combined company — which will have about $16.4 billion in annual sales — will be based in Melbourne. (Photo: MALCOLM DENEMARK/FLORIDA TODAY)

Former Harris Chairman, Chief Executive Officer and President William Brown will serve as chairman and CEO of L3Harris. He said it was important for L3Harris to remain in the community where Harris had existed for decades.

It was important enough that Brown agreed to allow “L3” to come first in the name in exchange for the headquarters being located in Brevard County.

“We’re part of the fabric of the community,” Brown said. “We’re so embedded in the community. We have a lot of people and good infrastructure. It’s not just two or three hundred people in a corporate office, it’s 7,000 people that make this institution work.”

In Florida, the company has 8,400 employees, 3,900 of them scientists or engineers, with an average salary of $90,000, across 40 locations in the state. It does about $306 million a year in business with Florida suppliers, as well as $125 million in regional research-and-development funding. Its major facilities in Brevard County are in Melbourne, Palm Bay and Malabar.

As a result of the merger, some former L3 and Harris positions will be eliminated, and some will be transferred from L3’s defunct New York headquarters. Most of those positions being added or removed will be in management, L3Harris spokesman Jim Burke said.

The final change in the number of Florida positions is not yet known, but it will be a net increase for the region. Ten executive positions already have been eliminated from the Palm Bay location, a slight reduction in the local workforce of about 7,000 Harris employees.

The company hosted a staff gathering to celebrate the completed merger. In the dimly lit room with spinning lights and loud music, employees expressed a variety of opinions about the merger. Some worried about changes that could be on the horizon while others hoped being part of a larger corporation could bring more opportunities.

Lynda Weatherman, president and chief executive officer of the Economic Development Commission of Florida’s Space Coast, said the merger is another plus for Brevard County’s economy.

“This merger of Harris and L3 Technologies will highlight Brevard County’s capabilities on a global scale,” Weatherman said. “We have always been proud of the Harris headquarters, and L3Harris will elevate the Space Coast, enhancing opportunities and technological advancements, as it becomes one of the top defense contractors in the nation.”

Melbourne Mayor Kathy Meehan said the deal, with its prospect of more jobs in the area, is “exciting news for Melbourne. It’s going to be huge for Melbourne and the Space Coast.”

Palm Bay Mayor William Capote said he is “thrilled that Palm Bay will be the new home for L3Harris’ integrated mission systems and space and airborne systems segments.”

“For years, my fellow Palm Bay representatives and I have been saying that our city is poised for great growth in the tech and engineering sector, and the new L3Harris merger is proof-positive that Palm Bay is a great place for companies to invest,” Capote said. “These new, high-quality jobs will enhance our local economy, and help to support new development in Palm Bay. We are excited to be hosting parts of the new L3Harris expansion, and we will continue to look for future opportunities to grow together.”

The merger — first announced in October — was approved by U.S. and European regulators on June 21 with the stipulation that Harris divest its night vision goggle manufacturing. Shareholders of both companies approved the merger on April 4.

L3Harris stock began trading Monday on the New York Stock Exchange under the ticker symbol “LHX.” L3 shares stopped trading upon the close of the market Friday, and each L3 share was converted into 1.3 L3Harris shares.

In addition to its announcement of the completed merger, L3Harris announced that its board of directors approved a 10% increase in the company’s per-share quarterly cash dividend rate, from 68.5 cents to 75 cents, corresponding to an increase in the annualized rate from $2.74 to $3. That’s an increase of 15% for legacy L3 shareholders. The increase goes into effect in the third quarter of calendar year 2019.

Former L3 Chief Executive Officer and President Christopher Kubasik will serve as vice chairman, president and chief operating officer. L3Harris’ new 12-member board of directors — which included both Brown and Kubasik — was drawn equally from Harris and L3.

In a statement, Kubasik said: “Our seasoned segment leaders and mission-focused operating structure will enable us to leverage our broad range of capabilities and complementary technologies to deliver advanced solutions and capture opportunities across multiple domains.”

Malave is new to the company. He succeeds the former L3 and Harris chief financial officers, Ralph D’Ambrosio and Rahul Ghai, who the company said in a statement, will “pursue new opportunities. Both D’Ambrosio and Ghai will actively support a transition period.”

Malave joins L3Harris from United Technologies Corp., where he spent more than 20 years, most recently as vice president and chief financial officers of the company’s $19 billion Carrier business segment.

Under the terms of a settlement agreement with regulators, Harris and L3 must divest Harris’ night vision business, including its manufacturing facility in Roanoke, Virginia, to an acquirer approved by the United States.

Without the settlement, the merger would have given L3Harris a monopoly over image intensifier tubes, an essential component in night vision devices used by the United States military.