Attention stargazers: here’s how to observe the brightest comet of the year

Stargazers look out, the brightest comet of the year will be flying by Earth later this week.

Viewers can see the bluish green Comet 46P/Wirtanen this Sunday, Dec. 16 when it passes closest to Earth in its orbit.

The comet, which was discovered by Carl A. Wirtanen in 1948 at the Lick Observatory in California, is a short-period comet with an orbital period of 5.4 years, according to comet watch.

With a diameter of only 1.2 kilometers, Wirtanen belongs to the Jupiter family of comets. Though it has a tiny nucleus, the coma, which is the cloud made up of dust and gases around the nucleus, is bigger than our largest planet: Jupiter. 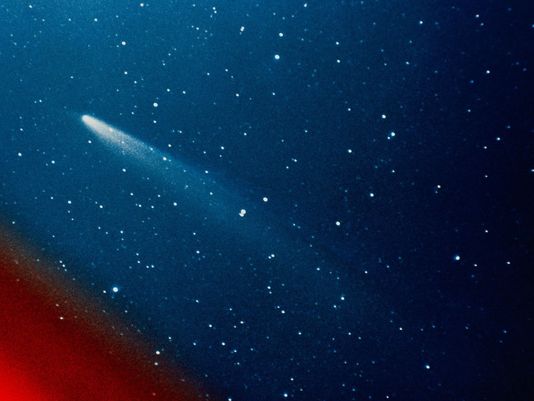 Comets are snowballs of frozen gases, dust and rock that orbit the sun, according to NASA. As comets get closer to the sun, they heat up and release dust and gases into a giant glowing head that are sometimes larger than most planets.

These space rocks are leftovers from the beginning of the solar system and though there are most probably billions of comets orbiting our Sun, the number of known comets is only 3,535.

Wirtanen comet will be 7.4 million miles away from Earth when it’s closest to us and it will be the 10th closest approach of a comet in modern times according to the University of Maryland.

However, don’t fear. There is no chance of the comet hitting Earth, so at least we’re safe for now.

Its visual magnitude, which is the apparent brightness of the comet, will be between three to 7.5, according to AccuWeather.

The brightest stars in the sky are 1st magnitude while the dimmest to the eye are 6th magnitude, according to EarthSky.

If the comet were like a star and had a point source, it would have medium brightness. Unfortunately, its coma and the almost full moon approaching will make it hard to observe Wirtanen.

Though the Wirtanen comet may be visible to the naked eye in an area with low light pollution, astronomers still recommend using telescopes and binoculars since the icy rock may be overshadowed by the almost full moon approaching.

Known for its tail, comets either have dust or gas ion tails. Wirtanen will have an ion tail, but it will been facing away from Earth when its closest to us so it may not be observable.

The best times to observe Wirtanen will be on Saturday and Sunday night, when the comet is closest to Earth between the constellation Orion and the Pleiades star cluster, according to AccuWeather.

Though there are some obstacles standing in the way, AccuWeather said Florida has good viewing conditions to see Wirtanen on Sunday night.

Along the Space Coast, some of the best places to go see the comet are the beach access points along Cape Canaveral. Cocoa beach, Satellite beach or Melbourne beach are all great places to stare up at the night sky.

For those who don’t want to risk having any light pollution, Kissimmee Prairie Preserve State Park offers plenty of places to sky watch.

Though it may not be as cold as some of the states up north, it might be a bit chilly for Floridians who want to enjoy watching the comet pass by. Make sure to bundle up and bring a chair or blanket to stay comfortable.

Also this weekend, the Geminid meteor shower will peak on Thursday night into early Friday morning and will bring up to 120 meteors per hour.

Comet 46P/Wirtanen, named after a Kenosha astronomer who discovered it, will be passing by Earth at its closest on Monday. (Photo: University of Wisconsin)

The Pro’s and Con’s of an HOA

The Pro’s and Con’s of an HOA As you’re looking for the next house to call your own, you might come across properties that are part of a homeowners association, or HOA. While most are familiar with this term from a distance, when you take a closer look, it’s likely...

END_OF_DOCUMENT_TOKEN_TO_BE_REPLACED

Things to Do in Port Canaveral

Things to Do in Port Canaveral Did you know that Port Canaveral is also known as “Florida’s Fun Port?” There is great reason behind this affectionate nickname to one of the world’s busiest cruise ports located right here in Brevard County. Whether you live within...